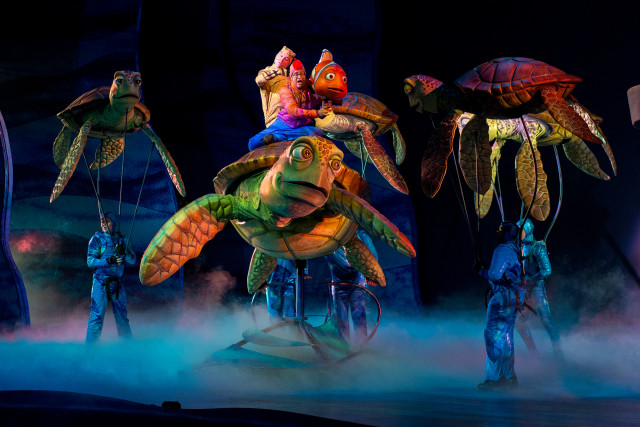 Besides the rides, one of the things that Walt Disney World does the very best is their shows and entertainment. I will tell you that I am a sucker for any nighttime show at any of the parks and I cry every time. Something about the magic of the lights and music makes me come back every year.

In recent years I have discovered that animal kingdom has two shows in Broadway style that simply cannot be missed. The first one is Festival of the Lion King and the second one is Finding Nemo: The Musical which is located way at the back of the park – but you’ll want to just keep swimming to see this one! 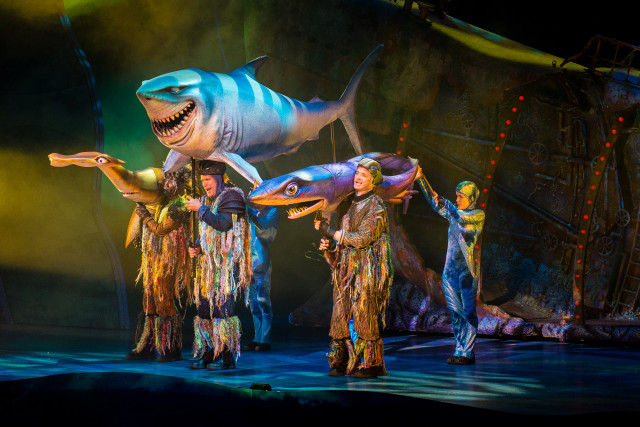 Fish are friends, not food! Photo by Matthew Cooper.

I have heard jokes around town that people use Finding Nemo: The Musical as a 45 minute break from the heat and sun. Although it’s great at serving a purpose for that reason there are many other important reasons that make this show my absolute favorite.Finding Nemo is one of my favorite Disney Pixar movies and Animal Kingdom does a great job in performing it live. Besides the obvious whimsical characters and complete fun that is the Finding Nemo story, the theater offers state of the art sound and light systems that really make you feel like you are underwater with all of your Nemo friends. Whether you are in the mood to sing along with a great score, meet a jellyfish in the audience, or help Marlin and Dory in their search to find little Nemo, the fun does not end at this show!What I love most about Finding Nemo: The Musical is that not only are the characters represented as puppets but there are also live actors onstage who voice and move them. The actors are unique because they are dressed in really neat costumes that match the characters they are playing. After a while you don’t even notice that the actors are there because you are so fixed on the Nemo characters – they are so life-like!

Just go with the flow! Photo by Matthew Cooper.

While the original Finding Nemo movie is not a musical, Disney does not disappoint with the songs for Finding Nemo: The Musical. It’s truly a Broadway caliber show!  Songs like “Just Keep Swimming,” “Not my Dad,” “We Swim Together,” “Go With the Flow” and more will have you dancing in your seat!

Fun fact: the music from the show is featured over at Epcot in The Seas. It’s fun to hear people sing along there because you know they have seen the show.

This is something at Animal Kingdom that surely cannot be missed. It’s a great way to relax and enjoy spectacular lights and a soundtrack that is heartwarming to any Disney fan. I highly recommend seeing the show!

Hey, would you like to go see Finding Nemo: The Musical in person. We can help. Give our friends over at Destinations to Travel a shout and you’ll be on your way in no time. 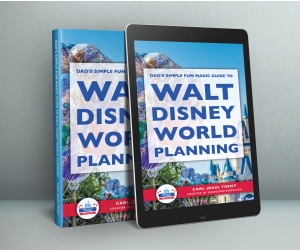